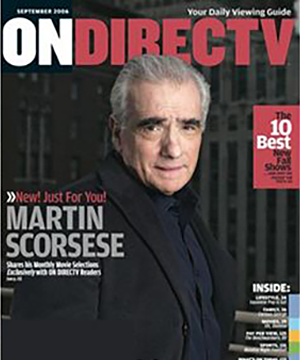 New York City, NY – Martin Scorsese is an Oscar-winning director whose filmmaking career spans more than 50 years. In a reversal of roles, Scorsese turns actor and portrays the role of “himself” on the other side of the camera, while being directed by another Award-winning director.

David Hill, former President of DirecTV, retained Grecco for this cover shoot. Hill needed a sequence of powerful images of Scorsese for an ongoing column in the magazine, enough still images to insert into the television commercials, and finally, make a killer cover image.

“The vision I wanted for the images were to speak of Manhattan and the ‘mean streets’ of New York, which so many of Scorsese’s films are associated with,” Grecco said.

Scorsese’s notable films include: the crime film Goodfellas, the psychological thriller Cape Fear and the crime film Casino. Scorsese has collaborated on some films with actor and close friend Robert De Niro. And is well-known for his successful collaborations with actor Leonardo DiCaprio, having directed him in five films.

The power-house team of Scorsese and DiCaprio relationship is one of the most successful collaborations in the film industry, responsible for over $1.3 billion in earnings from their five feature films. Gangs of New York $193M, The Aviator $213M, The Departed $289M, Shutter Island $294M and The Wolf of Wall Street $392M. Their collaborations have resulted in numerous Academy Award nominations for both as well as them winning several other prestigious awards. According to Forbes magazine, Scorsese has accumulated an estimated $100 million net worth from his move and film career.

Grecco and his creative team worked miracles with this tough assignment, given there was only going to be 45 minutes allowed. In that span of time, from the moment Scorsese arrived, a frenzied pace of grooming, wardrobe changes, shots on gray seamless and rooftop shots outside, close to 300 images were taken of Scorsese. And, in the middle of it all, it started to rain.

“I was honored to ‘direct’ the famous director. The great thing was I could tell him exactly what I wanted. He delivered it like the best actor, knowing exactly what the ‘director’, me in this case, wanted,” Grecco said of his experience with Scorsese that day.

A behind-the-scenes look of this NYC magazine cover shoot by Michael Grecco can be viewed on this Martin Scorsese video.

DirecTV is an American direct broadcast satellite service provider based in California and is a subsidiary of AT&T. Its primary competitors are Dish Network and cable television providers around the United States. The satellite service launched on June 17, 1994 and on July 24, 2015, AT&T acquired DirecTV in a transaction valued at $67.1 billion.