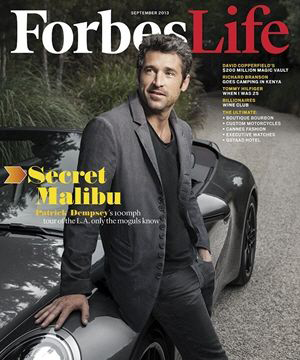 What many people don’t know, is that Dempsey is also a race car driver, car collector and savvy businessman. In 2013, successfully outbid Starbucks to buy 47 Tully’s Coffee locations, another Seattle coffee chain, in an effort to turn around the failing Tully’s company.

Dempsey appeared on the cover of Forbes Life Magazine, relaxed and having fun for the September 2013 Issue titled “Secret Malibu. Patrick Dempsey’s 100mph Tour of the L.A. Only the Moguls Know.” The Forbes Life cover shoot was led by award-winning celebrity photographer Michael Grecco and shot at Dempsey’s 3.3 acre $14M Malibu Estate.

“I am blessed. Really. I have been able to do the thing I love, image making, my entire adult life. I am not only blessed because I have been able to do it, but because as I have grown, it has been with clients like Forbes Magazine that appreciate my work. These relationships have existed for a very long time,” said Grecco of his repeated work with Forbes and well-known celebrity actors like Dempsey.

Dempsey won the 2015 People’s Choice Award for Favorite TV Drama Actor. In 2005, People magazine ranked him second in its annual list of “Sexiest Men Alive” and again in 2006.

All of this attention made Dempsey among one of TV’s highest-paid stars, earning him about $400,000 per episode, or roughly $9.6 million for a 24-episode season of the hit drama Grey’s Anatomy, produced by ABC Studios. Dr. Derek Shepherd, Dempsey’s character, was killed off in an April 23rd, 2015 episode, even though Dempsey still had one-year left on his contract.

For all of his accomplishments to date, Dempsey has amassed an estimated $60M celebrity net worth.